"Although Graham Foster seems to be inextricably linked to the blues, the word can be misleading, for although the guitarist does indeed play the blues, he plays an awful lot more than that. A guitarist of astonishing sublety, his playing is exquisite and extremely elegant. To watch him play his old Telecaster with neither pick nor effects and get sounds that so many strive for and so few achieve is a real experience; perhaps that's why so many members of his audience are musicians, captivated by his natural, unpretentious and tasteful virtuosity."


"Led by the guitarist Graham Foster, the trio left everybody speechless. Booked as the support act, it was like having dessert before the main course."


"I can't put it any other way: it was a gift. Foster was the undisputed star, totally in command of all aspects of the guitar: from classic rock to the blues, and from rhythm & blues to Country & western. In the American Rock last saturday we saw a 50 year-old boy with his toy: an old Telecaster which he still enjoys playing after 35 years - and that enjoyment is infectious. "I'm even more excited about things now than I was when I started out" a sweat-soaked Foster told me. His van, a beer, a place to play and his old guitar are all that are needed to make him happy. To that we'd like to add our grins of delight."


"From the moment the first few chords rang out it was obvious to everyone that something big was cooking up there, and genuinely, after hearing both the public and the staff's comments about what a great time they'd had, it became patently clear that those of us who were there that night could count ourselves among the privileged."


"Veteran guitar warrior Foster is a fully-fledged stylist, a guy who holds in his fingers the secret of an eternal sound, forged in the British rhythm & blues of the sixties and within reach of only a few maestros like Clapton or later forced emulators like Knopfler. He's not a pure blues guitarist - his music moves from swamp-rock to rock, from country-rock to ballad, but as he says "the blues is a feeling" and as such everything fits into it. So be it. His honest music can't fail live because the history of music is in there, or at least the pre-punk part, because Foster was in the kitchens when these sounds were cooked-up. If he comes your way don't miss him. Foster is great."


"The fact is that if playing is a pleasure, listening is much more so. If he's in your area don't miss him for you'll definitely end up regretting it. The reviews of Cazorla's recent Blues Festival resound with praise for the memorable show he gave, stealing the evening's honours from the one-and-only Mick Taylor. Do not let the opportunity to see him pass you by."


"Graham Foster is a generous host, a vitalistic man who doesn't hesitate to pass the reins to the companions who reinforce his trio, and their magnificent mutual rapport makes for a powerful, musical and spectacular rhythmical brew."


"Talking about Graham Foster is nothing new for the regulars of the Teruel music scene, because thanks to his quality, style, temperament and a large dose of humility Graham has won a permanent place among us: lunes de Ferias at the Peña El Peñasco, the occasional gig at the Fonda del Tozal ... and now the Rhythm & Blues Festival - any excuse to get to see him again is a good one. The fact is, for those who don't know him, we are talking about one of the guitar and stage greats, the master of the rock trio that we've been so badly in need of for the past few years; In short, Graham is one of those musicians who were born to play."


"Last Friday 25th of April at the Sala Heaven in Cacicedo (a great place to see live music) we witnessed the seeds of rock'n'roll - a great rhythm & blues concert that was both authentic and original. Incredible. Graham Foster was as enthusiastic as a newcomer - except that he's been playing for thirty-five years. Accompanied by bassist José Terol and drummer Juan Alandete, standing in for Damián García, their performance was a masterclass, and not just a musical one ..." 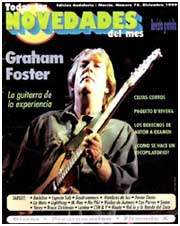