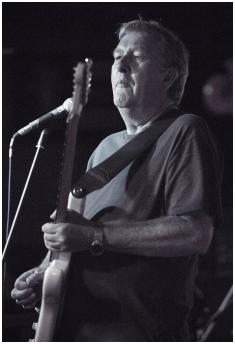 Guitarist/singer/songwriter Graham Foster's musical career began in 1972 as bass player with acclaimed London-based jazz pianist Brian Morris's trio, lasting two years (and over 500 performances). He then switched to his main instrument, the electric guitar, to concentrate on his own blues/rock trio The Roadsters (later Blitz), showcasing his instrumental and songwriting talent and making a name for himself throughout the London area in the process.

In 1976 he was "discovered" playing at the Marquee Club and signed to Elton John's Rocket record label, and had his first taste of success with the self-penned blues ballad "Count Me Out" from the album "On The Line", which reached the number one spot on the Capital Radio charts in the summer of 1977. This was closely followed by a second single "Make-Believin" which surprisingly made it to the number two spot in Peru. His group, The Foster Brothers, included his brother Malcolm (later to become bassist for The Pretenders and Simple Minds) and Robbie McIntosh (guitarist for Paul McCartney, Norah Jones, John Mayer and many others). The album was produced by Mike Vernon, known for his collaborations with John Mayall, Eric Clapton, Fleetwood Mac and Freddie King amongst others.

The following year, after having their vehicle and all equipment stolen after a concert at London's Rainbow Theatre, the group disbanded and Graham joined the classic-rock band Network. His colleagues in this short-lived band were rock veterans Gary Pickford-Hopkins (vocalist with Wild Turkey and Rick Wakeman ), John Gosling (The Kinks long-time keyboard man), Andy Pyle (bass-player for Gary Moore, Rod Stewart, Paul McCartney etc.) and Ron Berg (drummer for Wild Turkey and Savoy Brown). He toured with them and recorded the LP "Look To The Sun" in 1979.

By this time Graham's reputation had grown and he was invited to participate in recordings and concerts in a variety of styles: from the up-tempo rockabilly of Rocky Sharpe And The Replays ("Shout, Shout, Knock Yourself Out," "C'mon Let's Go") to the melodic jazz-fusion of Marshall Hain ("Dancing in the City" made the number one spot in 14 countries in 1979); from the modern soul of singer Alison Moyet to the controversial acid-rock of the veteran Country Joe McDonald whose anti-war anthem "I-feel-like-I'm-fixin'-to-die Rag" was a high point of the Woodstock festival in 1969. His fondest memory, however, is of the 1983 European tour as guitarist with soul/blues legend Etta James, culminating in a memorable appearance at Berlin's prestigious Jazzfest, sharing the bill with Miles Davis.

Around this time he returned to his roots: London's thriving pub-rock circuit, and for several years he combined studio and live work, releasing the double album "Showdown" in 1986 with his latest band Little Sister, whose line-up over the years included such luminaries as Mark Feltham (harmonica player for Oasis, Rory Gallagher, Nine Below Zero), Gerry Conway (drummer for The Everly Brothers, Cat Stevens, Pentangle), Les Binks (Judas Priest's drummer), Rupert Black (keyboard player for The Pretenders, Talk Talk) and Meatloaf drummer Andy Wells.

In 1988 he undertook a series of solo performances which led to his first appearances in Spain, where he was later to set up home.

In the early 90s Graham teamed up with Stretch bassist Steve Emery and Wings drummer Geoff Britton to form The Major Blues Band. The trio's frequent visits to Spain, coupled with the success of their 1992 LP "Solid", secured them a national cult following. Following this Graham decided to spend longer periods in Spain and in 1994 formed Graham Foster's Night Train, accompanied by three young Valencian musicians, touring extensively and recording the album "Blue Rhythm" with them the following year.

In the autumn of 1998 he was back in Valencia, accompanied by Night Train and M-Clan's keyboard player Luis Prado to record his first solo LP "The Bassman Tapes" and touring with a new 5-piece lineup which included the young Hammond organist Mauri Sanchis. Soon after this he decided to return to his favourite format, the trio, and formed The Graham Foster Group in the spring of 1999 with his old friend from the Major Blues days, bass player Steve Emery and Valencian drummer Damian García. They recorded their double CD "Live in Overdrive" in Galicia the following year.

Since his arrival in Spain, Graham has had the pleasure of playing with the likes of, among others, M-Clan, ex-Rolling Stones guitarist Mick Taylor, The Vargas Blues Band, Hook Herrera and Kiko Veneno, and has appeared on numerous recordings by artists from all over the country.